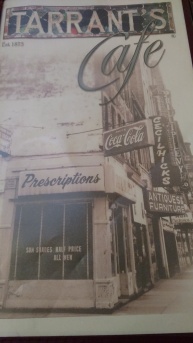 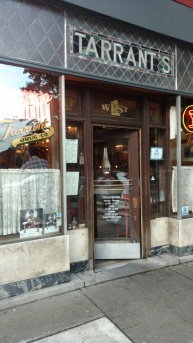 Reinvents southern swank and charm with a soulful nod to the love they impart on their dishes.

Located at the corner of Foushee and West Broad Street (near Jackson Ward), this restaurant finds a way to incorporate old south hospitality with a seventies swank/chic attitude in its ambiance and in each dish.  The menu takes a wide slice out of the culinary styles of American Bistro, Soulful Avant-Garde, and an ever subtle Island influence all combining into a mixture of southern dishes which are sure to tempt even the most willful obedience to watching those indulgences.

I have sat for some time to develop a review that could do this special place justice, among the culinary stops I have been privileged to experience.  This is has been a challenge, as there is just a sort of feeling one gets upon walking into Tarrant’s.  The establishment for all of its Avant-Garde/Chic charm is relaxing and inviting. There is just a simple feel of welcoming and a joy of sharing the culinary treats the chefs and bar tenders are able to create. On top of that if you can picture a staff that comes across as if they are all family welcoming you in for a meal from the humid summer, you’ll begin to get a sense of the joy Janelle, Tianna, Jess and all of the staff impart in the front of the house. The three of these women joined us in our jokes, listened to us regale about our exploits, and downright got with our humor right from the get go.  There is no other definition of personable, friendly service than these three agents of culinary fun – they are the “Chef’s Angels”.

In 1883 the establishment was constructed (as part of Richmond’s restoration efforts after the Civil War) and began as a drug store.  In 1905 the place was purchased by William Tarrant and became known as Tarrant’s Drug Company until 1987.  It was a neighborhood staple then in its capacity to take care of the health of the residents, today it continue to take care of the mental health of the residents as an upscale but affordable neighborhood restaurant that makes everyone walking through the door feel as if they are a part of the neighborhood.

Tarrant’s Café is where to get your food groove on and to experience Southern hospitality in Richmond, VA.

Our party started with a series of appetizers, well priced and platted to bate our appetite and pair well with our ordered drinks.  The Hummus plate (with its house made olive oil flat bread, red onion cucumber, roasted red peppers, banana peppers, tomatoes and olive toppings) was a light appetizer full of flavor and Mediterranean zeal. The fried calamari was well cooked, the squid rings melted like butter with the slightest bite. 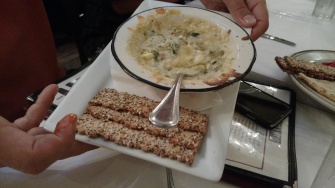 The crab and spinach dip with She Crab was an unheard of oceanic treat in that most often the female crabs have to be tossed back.  Immature females with their internal roe are used here which imparts a richness and fabulous color to any accompanying dishes.  For the stout of heart Tarrant’s Buffalo wings were added, for any southern table does need to provide a little heat.

The CT ordered a cup of their She-Crab soup which was as unheard of oceanic treat.  The flavorful crab and roe provided a briny yet rich/velvet flavor matching well with the sherry infused cream based soup.

Next to a fine cup of New England Clam Chowdah, Tarrant’s She Crab Soup is a must. If I could have taken a quart, a gallon or two home on the plane I would have.

Now we turn to the entrées, which as noted were and are very diverse in terms of the culinary styles offered.  I will turn to dinner specialties that night because if you ever get a chance to try these two plates, you need too!  As the CT, I always defer to the judgment of the wait staff (if they have at this point been very personable and engaging) of what is the best dish in the list of evening specialties.  This night, the strategy worked!

I ordered the Triple Nut Encrusted Opakapaka (or Hawaiian Pink Snapper) which came accompanied by brown rice and sautéed vegetables.  The walnut crusting provided a soft but yet warm nutty flavor profile against the soft, flaky and subtle flavor of the snapper.  Yes, by itself the entrée was mouthwatering but along with the encrusted snapper the chef provided a sauce that just merged the flavors of the fish and the nut coating with surreal bliss.  The sauce, an amaretto lobster cream sauce, was so delicate and creamy it could but only enhance the fish beyond measure.  If you can envision or taste, the sauce had a velvety texture similar to a warm caramel drizzle, balancing the richness of the lobster cream and nutty amaretto into a sweet but not overpowering coat of flavor un-paralleled.  The chef enveloped the snapper in a caramelized “apple crisp-crunch essence”  that is two streets past the top of Flavor Town, imbibing in our opinion a French Cuisine and Southern Sweetness mix that is a must when visiting. 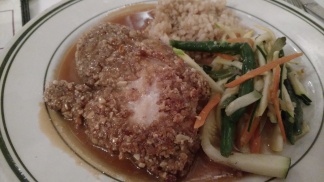 Not to be out done, and really from the experience around the table there was not a down heartened spirit to be found, the other menu offerings provide their own Flavor Town experience that can keep you returning to try.  From our crew, Gus decided to try the truly southern at heart dish, Fried Chicken & Waffles.  Now, when you think about southern cooking nothing says home cooking more than good ‘Ol fried chicken.  Tarrant’s take on such is to bring your senses on line and tease your waist line. 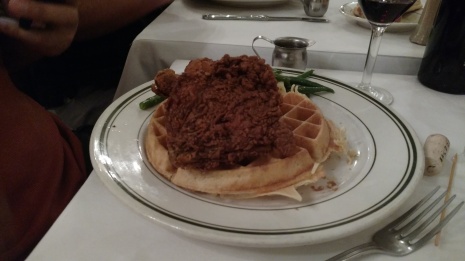 The waffle was the definition of golden brown deliciousness, soft, warm, flaky it just couldn’t get better and then they did. As we have heard, Winner Winner Chicken Dinner! Well here in the heart of Richmond – Hun you ain’t had chicken till you have had Tarrant’s.  The Chicken was deeply fried but very moist in the inside. You could feel the warmth of the oil bath and taste the love imparted into this half of a chicken.  IF the lobster amaretto cream sauce was the epitome of a warm apple crisp, the waffle sauce of maple syrup, pomerey and tahini was ambrosia from the Southern Gods.  The sauce was so killer, Gus went home with quarts…Plural…quarts!

We can’t say more about Tarrant’s Café, other than from a Southern, Avant-Garde/Chic perspective the place is the Bomb-Diggity!  We but scratched the surface of the culinary treats Tarrant’s will tempt you with.  From the selections to the décor, from the door to the familial staff, heck to Janelle, Tianna, Jess and that Godly like sauce you will be hard pressed to find a better upscale and fun place to gather, dine, and have fun.

Gus couldn’t get in fast enougj

The CT getting the staff into the fun of the nite

Our crew loves to ham it up for the camera

while others talk the nite away